What happened in July?

Inflation and central bank actions continued to dominate the news and heavily influence capital markets.  Inflation is beginning to be tempered as economic growth slows directly and indirectly from interest rate increases from the Bank of Canada, the Federal Reserve in North America and from the European Central Bank. 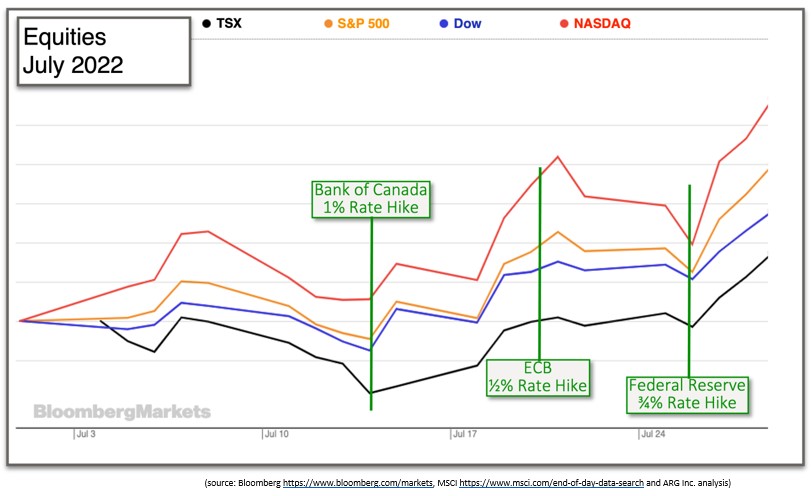 U.S. consumer inflation reached 9.1% as prices rose by 8.1% in Canada on an annualized basis.  Canadian monthly price increases over the latest reporting period were halved to 0.7% from 1.4% a month earlier.  In the U.S., monthly inflation is continuing to increase.  The latest month had 1.3% inflation versus 1% one month earlier.  The reporting period for all this inflation information was June and year-over-year to June. U.S. Bureau of Labor Statistics   StatsCan

While June’s data was being collected and analyzed, July provided some respite from price increases.  Commodity prices have slowed their growth and, in some cases, reached lower levels.  From recent highs near $120 per barrel, oil was trading near $90 during in July.  Since transportation costs based on fuel prices affect the prices of almost every other good or service, this was welcome anti-inflationary news.

The cost of oil has been heavily influenced by geopolitical matters since the invasion of Ukraine.  Although no diplomatic solution has been reached, it appears that Europe’s ability to curtail demand could also be contributing to lower energy prices.

In the current environment of high inflation, the goal of monetary policy is also to reduce excess demand.   The European Central Bank (ECB), the Bank of Canada and the Federal Reserve all raised their benchmark interest rates in July.  The ECB, BoC and Fed moved their rates ½ percent, 1 percent and ¾ percent higher, respectively.  Although each of these major financial regulatory institutions deployed increases of varied amounts, their objective was identical.  Inflation is running far outside the target range in each geography and country and increasing the cost of borrowing is the primary method to slow economic growth by slowing demand; which will slow inflation.  ECB Statement   Boc Release    Fed Announcement

The Banks’ objective is to slow inflation and not enter a recession by slowing the economy and demand.  The markets positive response is indicating that central banks are acting appropriately and that the damaging effects of higher interest rates have already been priced-in to the market.

What’s ahead for August and beyond?

Central bank actions and inflation will continue to dominate investment implications.  Since the target rate of inflation is 2%, or a range centered on 2%, a significant amount of time will need to pass to allow current and future interest rate increases to take effect.

Despite the major rebound at the end of July, it will take more lasting momentum to create a resilient rebound for equities.  Typically, diversification is a useful tool against downside risk.  However, when the broad market is losing ground, a different strategy may need to be utilized to make upside gains.

For individual companies, balance sheet strength is important since reserves can weather downturns and periods of slow growth.  Firms with larger capitalization often have more resiliency than small-cap firms.  From an industry perspective, necessities, not luxuries, make more sense.  Healthcare and staples trump travel and tourism, for example.  All other things being equal, banks and insurance companies often outperform other industries in higher interest rate periods.

It is unlikely that interest rates will ever return to the levels of the late 1970s or early 1980s that provided significant income and returns, but higher rates favour those who need regular income from lower risk assets like GICs.

Each investor’s situation and needs are unique and must be considered to create an individualized plan.  Also, a review of the short and long-term plan in context of changing conditions is an excellent tactic to better achieve financial goals.