When should you take OAS (Old-Age Security)?

Old-age security (OAS) is an important program for Canadians to consider when deciding when to start receiving benefits. While many people do not have the option to defer their payments, those who do have the financial means should consider the effects of inflation on their decision. OAS is Canada's largest federal program, with benefits that are adjusted every quarter. As of July 1, 2022, those who are 75 years or older will receive a permanent 10% increase in their monthly benefits. On January 1, 2023, the maximum OAS amounts for individuals between the ages of 65 and 74 will be $687.56, and for those 75 and older, it will be $756.32. To qualify for OAS, a person must be a Canadian citizen or legal resident and have lived in Canada for at least 10 years after the age of 18. If a person has lived in Canada for fewer than 40 years (after the age of 18), they will receive a partial payment based on the number of years they have lived in Canada divided by 40. There are special rules for those who work outside of Canada for Canadian employers. OAS benefits are available at the age of 65, but they can be deferred until the age of 70. The enhancement for delaying the start date past 65 is not as generous as the enhancement for the Canada Pension Plan (CPP), which is 0.7% per month rather than 0.6% per month for OAS. The chart following illustrates this enhancement. 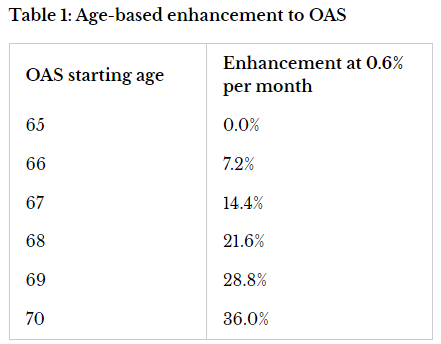 The OAS program adjusts the amount of benefits paid every quarter based on inflation. This adjustment applies to all OAS benefits, including the guaranteed income supplement. The government looks at the average Consumer Price Index (CPI) for two different periods of three months each: the most recent three months for which the CPI is available, and the last three months where the CPI caused an increase in OAS benefit amounts. In the first quarter of 2023, the OAS payments increased by 0.3%, bringing the total increase for the year to 7.0%. When deciding when to start receiving OAS, people should consider factors such as their employment and other sources of income, how long they might live, and inflation. In the following case studies, we will look at these factors in more detail.

Sam is 70 years old and meets the requirements to automatically receive OAS. He has a Canadian address, has participated in the Canada Pension Plan (CPP) for at least 40 years, and has been approved for CPP. Service Canada told Sam that his OAS payments would start in December 2017, the month after he turned 65. However, Sam did not know that he could defer his OAS payments. In December 2017, he received his first payment of $585.49 automatically. He continued to work and most of his OAS payments were taken back because of his income.

If Sam had chosen to defer his OAS for the maximum of five years, he could have received $932.28 as his first payment. This is the maximum payment of $685.50 for the fourth quarter of 2022, with a 36% increase. Since Sam is now retired and no longer receiving employment income, there would have been no clawback of his OAS payments. He would have received this higher amount, adjusted for inflation every quarter, for the rest of his life.

Sam is unhappy that he did not think about deferring his OAS payments. When you defer your OAS payments, you get more money each month. This is because the amount of money you receive is increased to account for inflation. If Sam had deferred his payments for the maximum five years, his first payment would have been 59.3% larger: $932.28 instead of $585.49.

Since 2013, Canadians have been able to defer their OAS payments. However, not many people choose to do this. According to data from the Canada Revenue Agency, only 4% of people who were eligible to defer their payments did so between 2014 and 2018. The average length of deferral was 23 months. One-third of people deferred their payments for one year or less, and more than 60% deferred for two years or less. Only 20% deferred for two to three years, while the rest deferred for more than three years.

Most of the people who deferred their OAS payments were either still working or had high incomes, like Sam.

Many retirees do not realize how long they will live when deciding when to start receiving OAS (and CPP/QPP) benefits. According to the most recent actuarial evaluation of the CPP, the average life expectancy for a man born in 2019 is 80.0, and 84.6 for a woman. The Canadian Pensioners' Mortality Table shows that a man who lives to 65 has a 50% chance of living to 89, a 25% chance of living to 94, and a 10% chance of living to 97. For women, the equivalent ages are 91, 96, and 100. It's important to note that people who are in pension plans generally live longer than the general population.

Karl is retired and will turn 65 soon. He is deciding whether to start receiving OAS at 65 (in January 2023) or to wait until he is 70. Karl meets the requirement to receive the maximum OAS because he has participated in the program for 40 years. He knows that the government will increase his OAS benefits by 10% when he is 75. If Karl delays his OAS, the 10% increase will be based on both the enhancement and the increases due to inflation.

In 2022, someone receiving the maximum OAS would have received about $7,929 for the year, which is about $660 per month on average. We will assume that the average monthly OAS payments will increase by 5% in 2023 and then by the Bank of Canada's target inflation rate of 2% each year after that. 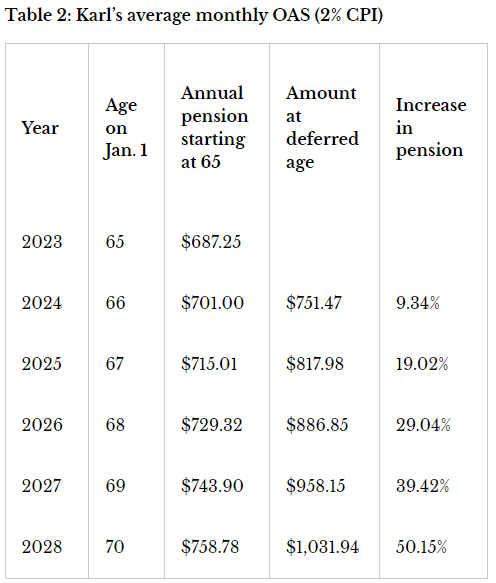 As you can see in Table 2, Karl's pension is increase by quite a bit by deferring to age 70.

It is important to take into account the total amount Karl would receive if he starts receiving benefits at different ages. As shown in Table 3, if Karl delays receiving his OAS benefits from age 65 until 70, the point at which he breaks even financially is in his 80th year. This occurs well before Karl's expected lifespan. (Note: We are not considering the hypothetical after-tax interest that Karl could earn on the OAS benefits he could have received earlier.) 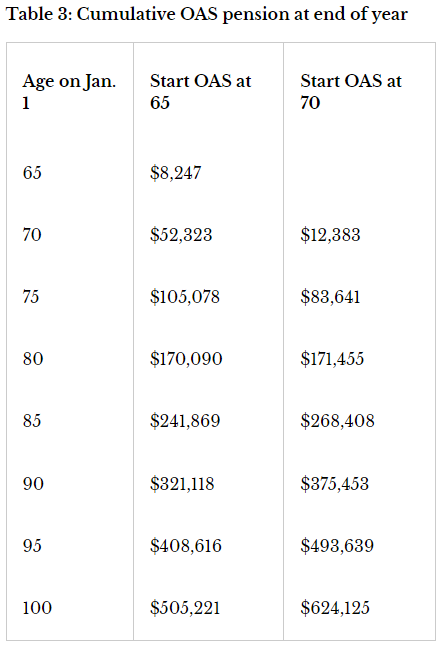 It is also important to consider the OAS clawback. Unlike the CPP, OAS benefits are income-tested and subject to a reduction based on income above a certain threshold ($86,912 in 2023). For every dollar of income above this threshold, OAS benefits are reduced by $0.15. (It's worth noting that the CPP offers survivor benefits, but the OAS does not.)

If a person begins receiving OAS benefits at age 65 in January 2023, they can expect to receive approximately $8,247 in OAS payments. However, if their income for that year exceeds $86,912, they will enter the clawback zone and their benefits will be reduced. At an estimated income of $141,917, all OAS benefits would be clawed back. In this case, it might make sense to delay starting OAS benefits until a later year to avoid having them clawed back.

One advantage of deferring OAS benefits is that the income threshold for the clawback zone increases at a rate of 0.6% per month, which is higher than the rate of inflation. Deferring OAS may allow clients to keep more of their benefits in future years.

Returning to the first case study, we can estimate the increase in the income threshold for the clawback that Sam would have received if he had received the higher pension for a period of 12 months. We can estimate this as follows:

It's important to note that the income ceiling for the OAS clawback is higher for individuals who are 75 or older. This is because it takes into account the 10% increase in benefits for this age group. In 2022, individuals who did not defer their OAS benefits would have received an additional $405.70 from July to December, which increases the income ceiling for the clawback zone to $137,331. For a full year, the increase would be double this amount, and it would be even larger for individuals who deferred their OAS benefits.

Let's consider another case study to examine the rules surrounding the cancellation of OAS payments.

Amanda applied for OAS in the summer of 2022, believing that her income would be low enough to avoid the clawback. However, she received a surprise year-end bonus.

Since Amanda had been receiving OAS benefits for less than six months, she has the option to request that her payments be cancelled by contacting Service Canada. She must repay the amounts received and has the option to defer the start date to potentially preserve her full access to OAS benefits and take advantage of the increased benefits from deferral.

As with CPP, careful consideration must be given to determining the appropriate start date for OAS benefits. Some high-income clients will always have their OAS benefits fully clawed back. However, for others, careful planning can minimize the clawback effect.

For many Canadians, CPP and OAS are their only sources of lifetime income, and taking advantage of the increased benefits by deferring may be the best option.

It is worth considering whether the introduction of automatic enrollment has led more individuals and their advisors to forego the necessary analysis and start receiving these benefits earlier than is optimal, assuming a normal life expectancy."

F. Paul Moore is a Senior Wealth Advisor with Assante Capital Management Ltd. Please contact him at (519) 752-3155 to discuss your particular circumstances prior to acting on the information above.

Assante Capital Management Ltd. is a Member of the Canadian Investor Protection Fund and Investment Industry Regulatory Organization of Canada. Insurance products and services are provided through Assante Estate and Insurance Services Inc.