What happened in October?

The beginning of the month was uneven for equity investors.  After rising-and-falling, the major North American indexes, repeated their rise-and-fall again by mid-month.  The more broad-based indexes, the TSX and S&P 500, were flat after these ups-and-downs, while the Dow and NASDAQ had lost 3.2% and 2.4%, respectively.

Since the close of markets on October 14th, the trend has been steadily upward with the equity indexes gaining between 4% and 14% during the month. 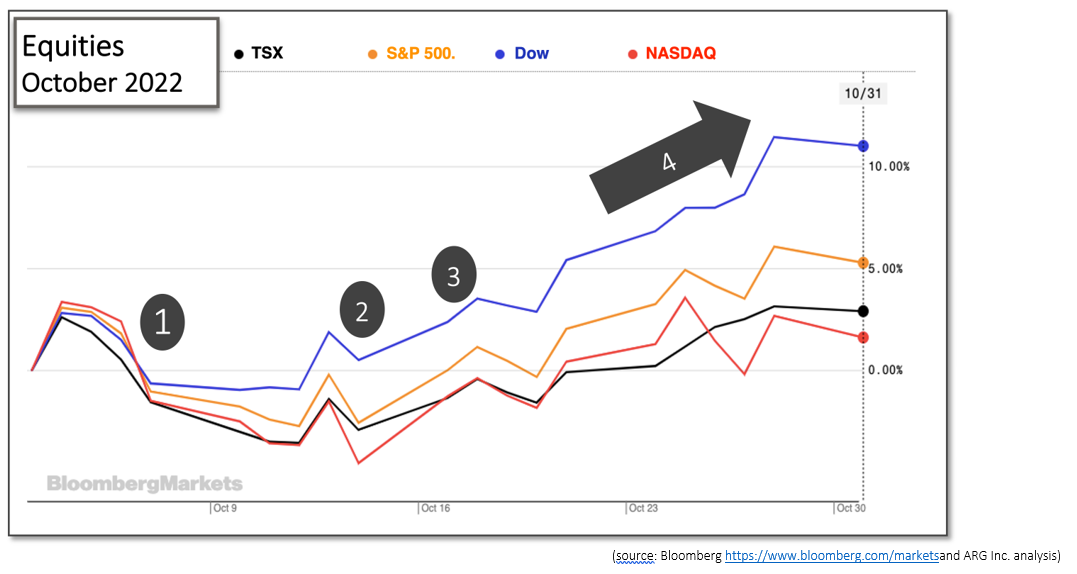 Several factors influenced equity prices during the first half of the month, until more consistently favourable conditions arrived as the month continued to its conclusion on Halloween:

The factors affecting markets most will continue to be interest rates and inflation well into 2023.

What’s ahead for November and beyond?

The moves by central banks to limit inflation and reverse its growth will continue for the foreseeable future.  The Bank of Canada announces monetary policy on December 7th, January 25th and March 8th, and the Federal Reserve’s FOMC is scheduled to deliver interest rate announcements on November 2nd, December 14th, February 1st, and March 22nd.  The speculation prior to each of these announcements will be active, and both the speculation and the actual monetary policy moves will cause markets to move.

The key influences of whether rates will continue to rise, stabilize and, eventually, fall are the rate of inflation, employment and wages, and economic output.  Following these underlying indicators, and analyst expectations of them could provide insight regarding monetary policy for investors.

A proven long-term defence during periods of uncertainty is to select investments that match your overall strategy and continuously monitor them and adjust accordingly.  For example, some industries are more reliant on shorter-term credit and will experience the increased expense of rising interest rates sooner.  Utilizing unreliable or inexperienced sources, moving outside your risk tolerance, or into investments you do not understand can quickly undermine the discipline that has built your retirement nest egg.

The follow-on effects of higher interest rates pushing the economy into recession, which drives corporate performance downward, and drop share prices are the chain-of-events that will continue to concern advisors and their investors.