A more contrite question might be “what didn’t happen in 2020?”  Along many dimensions, it was a very difficult and volatile year for Canadians and almost everyone on the planet, because of many factors.  In addition to the coronavirus, we endured government reactions to the pandemic, a contentious U.S. election cycle, the continuation of the Brexit saga, on-going trade tensions between and among many nations, and racial unrest and protest to name a few of the challenges we faced last year.

Financially, at least, the year ended much better for capital markets than was expected in early spring and during the summer.  2020 had a “Bull-Bear-Bull” cycle over the course of the last twelve months.  All of the major North American equity indices finished in positive territory, which seemed almost unimaginable after markets lost one-third or more of their value by mid-March.

By midyear even after a slight market recovery, many investors felt that several years of savings and gains had been lost forever.  For those with patience and who held the market broadly enough to mimic the major indices, far better results were achieved than permanent losses.  At its worst 2020 delivered little or no gain, and at its best investors over-weight in technology stocks experienced excellent results. 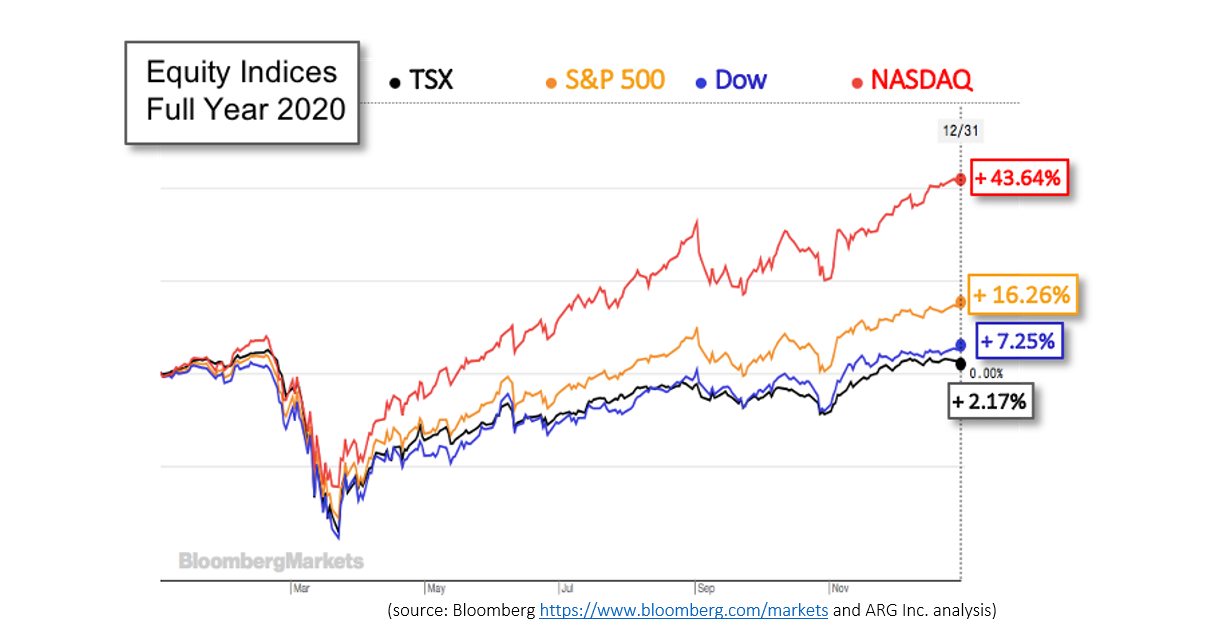 Overall the TSX performed the worst among the major North American equity indices returning slightly more than 2% for the year.  At the other end of the spectrum was the NASDAQ that delivered over 43%!  The Dow and S&P 500 returned 7% and 16%, respectively, by the end of 2020.

Since each index has a unique composition and concentration of firms, each of which are affected differently, provides some insight into overall performance.

One year ago, 2020 started well for equity markets with solid gains being posted over the first seven weeks of the year, despite a small dip in January.  Unfortunately, most of us were unaware that the coronavirus was gathering strength as it spread in Asia, Europe and North America.  The efficiency of markets was displayed in late February, when the success that most investors had been enjoying quickly reversed itself.  Over the next month the value of equity indices dropped by 30-40% as the extent and severity of the then epidemic was growing.

In the autumn after about 6 months of increased volatility, North American indices had recovered sufficiently to erase the losses of February and March.  A local peak was reached in September followed by a short period of losses.  The last quarter of the year saw a challenge to the steady progress against the pandemic as measures were relaxed, which led to a resurgence of cases, hospitalizations and deaths across Canada, the U.S. and western Europe, which comprises the largest economies other than China and Japan.  Despite the worsening of the pandemic, equity indices performed very well in November and December.

An apparent disconnect between economic performance and stock market values has emerged since equities are climbing as the virus’ return forces new restrictions on businesses.  Many of the market rebounds in 2020 have seemed to rely upon the future results of current actions.

Monetary policy decisions by the Federal Reserve and the Bank of Canada to maintain very low interest rates, to indicate that rates will not rise until inflation returns and to purchase high volumes of bonds to promote liquidity factored heavily.  Markets saw these actions as positive, which they are, but rates were already low and expected to remain at the bottom end of their effective range.  In the U.S. the initial stimulus package provided some relief for businesses and households, but many months passed before any additional, substantive relief was discussed.  The second wave of cheques from Congress have yet to be dispersed.

In Canada our government’s actions were far from perfect; many corrections and clarifications had to be issued after initial rounds of both fiscal and public health initiatives were undertaken.  From a positive perspective money was put directly into the hands of Canadians to provide economic, social and emotional security.  The financial bill has yet to be tallied and will likely far exceed estimates.  However, when the time to pay arrives we should be in much better condition than had we taken a minimalist approach. Time, of course, will tell.

Progress on an effective coronavirus vaccine has provided plenty of upward pressure on equities, but substantial revenue increases, for most firms, will not materialize until more normality returns.  Once real and predictable progress is made against the pandemic, the gap between economic performance and equity valuation will narrow.

What’s ahead for January and beyond?

For equities, profitability drives a company’s stock price and market value over the long-term, not the promise of a vaccine or stimulus checks for individuals.  Businesses will need substantial assistance to begin a sustainable rebuilding of their firms and in-turn, the Canadian economy.

To prepare for 2021 and beyond, Finance Minister, Chrystia Freeland, provided an economic update at the end of November.  Additional stimulus of $70-100 Billion has been planned once the pandemic is under control and the stimulus is expected to be parsed out over the next three Federal fiscal years.  Further details are expected to be released in the 2021 Federal Budget in late February or early March. The projected budget deficit for this year has been updated to $381 Billion, $121 Billion for 2021/22 and $50 Billion for 2022/23.  The stimulus package, when presented inside the next Federal budget, will make it a confidence vote, which could end the current Liberal minority government’s rule and cause a spring election.  Video of the announcement from CBC is found at https://www.cbc.ca/player/play/1825866819963

Public health measures are being renewed and strengthened.  A summary be found at https://www.theglobeandmail.com/canada/article-coronavirus-rules-by-province-physical-distancing-open-closed/

The public health success against Covid-19 domestically and internationally will continue to affect financial markets as 2021 unfolds.  Much success in vaccine development has occurred.  Unfortunately, the predicted vaccination schedule has been too optimistic.

Vaccinating those most at risk like healthcare workers, the elderly and those with severe, existing health issues, will require additional calendar time, delaying vaccinations for the rest of the population.  Until herd immunity is effectively achieved a return to every-day life will elude us.  Without a return to every-day life pressure on many businesses that comprise indices will persist.

Essentially, two approaches are available for investors; 1) remain patient or 2) focus on investments that can withstand additional downturns and could benefit from the eventual success against the pandemic.  Regardless of your chosen approach, I recommend a conversation to confirm plans and strategies since we have concluded the most difficult year in decades, if not a century.